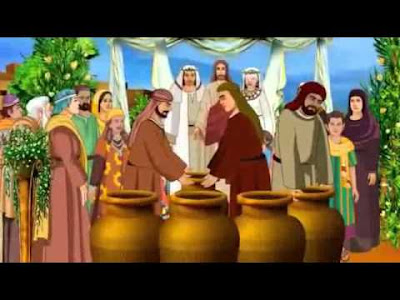 Jn 2:1-11
Today the liturgy completes one of my favourite series of readings: the readings around epiphany, which are especially complete this year, in year C of the lectionary. The word ‘epiphany’ means ‘manifesting’, and in this season the Church is pointing out to us all the things that are ‘manifested’ about Christ in His coming. We complete today a three week series of readings:
Two weeks ago we had the epiphany to the wise men who came from the east to worship the new born King of the Jews, manifesting that He was to be the saviour not just of the Jews but of gentile peoples –indicating that salvation is now possible not only for the Jews but also for Gentiles like the wise men and like the English, if we will but worship the Messiah of the Jews;
Last week we had the epiphany in the river Jordan at His baptism, when the voice from heaven spoke and manifested Him as the “Son, the Beloved”(Lk 3:22) –indicating that we too are to be loved and be adopted as children of our Heavenly Father if we will unite ourselves with Jesus in baptism;
This week we complete this series of epiphanies by recalling the very first miracle that Jesus worked, at the wedding feast at Cana.

So, what does His first miracle manifest about Jesus? As we sing in, “Songs of thankfulness and praise” (the hymn for this threefold epiphany), in this event He is “manifest in power divine, changing water into wine”.
The point very simply is this: in His appearing has has revealed Himself to be a God of power, a God who DOES things. The miracle at Cana, the start of His “public life” (as we call it), manifested what would be a pattern throughout His public life: He worked miracles, God’s power was displayed. He gave sight to the blind, health to the crippled, He opened the ears of the deaf, He raised the dead, and He crowned all these displays of divine power by His own rising from the dead, three days after His crucifixion.

This manifesting, this epiphany, as I said, is that He is a God of power, a God who does things.
Now, as we know, many people in our world today are oblivious to the action of God. They see the beauty of the world, the order of the cosmos, the rationality that has been put into the laws that govern physics, but they someone fail to see that all these things have a source –God.
If we think about the miracle at the wedding feast at Cana we can note that it was the same there. Everyone tasted the new wine, they even said, “you have kept the best wine till now”(Jn 2:10), but it seems that, some of them at least, they failed to ask enough to know that this new wine came from the miraculous power of Christ.

My point to you today is a very simple one: we too need to be aware that all the good things in our lives come from God.
In countless acts God has manifested Himself, has given us epiphanies of what He is like, and one of the things He has revealed is that He is a God of power.
Day by day He manifests Himself in our lives and in what happens to us - even when He leads us by the hard path of the cross.
We can choose to be attentive and recognise Him and His activity, or we can be oblivious to it.
“At Cana in Galilee He let His glory be seen, and His disciples believed in Him”(Jn 2:11).
Let us be like them, let us “believe in Him”, and recognise the glory He has manifest for me and for you.
Posted by Fr. Dylan James, Catholic Priest, dual American-British citizen at 00:05