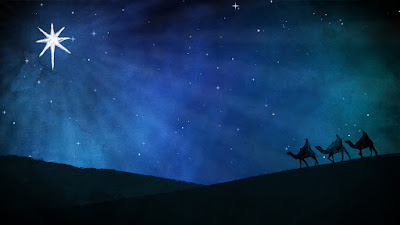 I'm not going to give you a full sermon today because at the end of Mass you're going to hear a few words from Brother John, a young American with the Community of St John.

In many ways Brother John, being a Religious and thus dedicated to contemplation, is an example of a point I have made to you before about the wise men who followed the star:
The star was in the sky for everyone to see, and yet only three ‘wise men’ understood what it meant and followed it.
Those wise men were ‘magi’. They didn't yet know the fullness of truth in the Lord Jesus, but they knew enough to pray, to contemplate, and had probably heard the Jewish prophecy of Messiah. They also had words of pagan magi Zoroaster: “A VIRGIN will conceive and bear a son, and a STAR will appear blazing at midday to signalise the occurrence… When you behold the star follow it… Adore the mysterious child, offering him gifts with profound humility” (see last year's fuller sermon here).
Because they prayed and contemplated and studied they were able to recognise the star.
Because they were detached from their worldly goods they were able to leave them behind to follow the star.
And because they did this they knew, as we heard in that Gospel text, they knew the joy, the “delight” (Mt 2:10) of encountering the Lord, laid in the manger.

You and I, likewise, need to pray, to contemplate, and to study the Scriptures,
And if we do then we will see the signs of the Lord speaking to us,
And we too will encounter Him,
And we too will know the spiritual “delight” of His Presence.
Posted by Fr. Dylan James, Catholic Priest, dual American-British citizen at 01:00