Baptism of the Lord, Year C 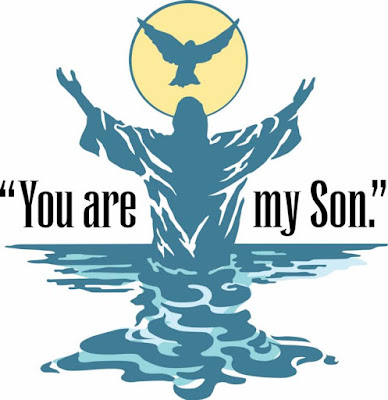 Isa 40:1-5.9-11; Lk 3:15-16.21-22; Tit 2:11-14, 3:4-7
I'm going to point out to you a detail in our readings today that only those of you who are extremely attentive will have noticed: our first reading, for Year C of the post-Christmas feast of the Baptism of the Lord, is the same text that we hear in Year B for the pre-Christmas 2nd Sunday of Advent. The reading speaks of the “consolation” of God’s people, “ ‘Console my people, console them’, says your God”(Isa 40:1).
So, somehow, we both need to be consoled BEFORE Christmas in preparation for the coming of the Lord, and, AFTER Christmas in the context of the Lord having already come.

But if we've just had the great celebration of Christmas, why should be need consoling?
Well, in contemplating this text during the week it occurred to me that this is EXACTLY the time when a good many people DO need consoling: exhausted with Christmas activities, events, families, tucker-out by the “New Year”, NOW is a time when many of us need consoling.
And part of what we need consoling FOR is in order to face the new year.

And the thing that purifies us, that sets us free, that means our sin is atoned for, is the union of these two realities in baptism:
The Lord Jesus was baptised, not because He needed it,
But so that we might be united to Him, cleaved to Him, by being baptised ourselves.
The Holy Spirit descended on Him “in bodily shape, like a dove”(Lk 3:22);
The Holy Spirit descended on us in our baptism, and descends on us anew every time we turn back to the Lord as seek a new start in Him.

So, if we start the new year tired, deflated, dirtied with our sins,
Then this “appearing” is a reminder of how we can start afresh in the Lord.
And this is a message of “consolation”.
The Lord has been revealed as our new beginning.
Whatever new beginning we need at the start of this new year, the grace of the Lord, revealed publicly at His Baptism, is the sign and promise of us being able to make such a new beginning.
We make this new start, we ever, not by our own power but by His.
And every time we do that voice speaks again, to us, saying, “You are my Son, the Beloved; my favour rests on you”(Lk 3:22).
Posted by Fr. Dylan James, Catholic Priest, dual American-British citizen at 00:05