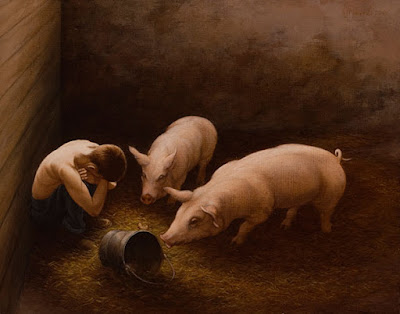 Lk 15:1-3.11-32
Today, in reflecting on the familiar parable of the Prodigal Son, I'd like to draw something new from it by focussing on on one thing: the distance of the son from the father, note the comparison between that and ourselves, and linking it with some comments from Pope Francis in his book interview for the Year of Mercy.

So, the distance of the son from the father. Let me note the stage when he has taken his father’s money and gone off to a distant land, to spend it all on “debauchery”(Lk 15:13) and “women”(Lk 15:30).
Let us note that the son, at this stage, seemed quite oblivious to the fact that he was DISTANT from his father. There is no indication that he disliked his father, or resented him, rather, simply that he wanted to be elsewhere. His relationship with his father seems to have been of no concern to him.

I was thinking of this when I read some words of Pope Francis in his interview on the Year of Mercy, when Pope Francis commented that it was characteristic of the 20th Century, and commented on by Popes Pius XII onwards, that our modern world has lost its “sense of sin”.
It has lost the sense that what we DO with our lives affects our relationship with our Heavenly Father.
It has become rare for people to feel that their deeds offend God, rare for people to think that their deeds separate them from God.
It seems, to me, that this describes a scenario like the prodigal son, who is distant from his father, but seems to have no real awareness that this is the case, or that this is a problem.
In a Year of Mercy, sadly, mercy cannot reach those who do not know their need of mercy.


There is another phase in the parable. The son runs out of money, he is starving and desperate enough to eat the husks the pigs feed on.
Now, finally, he remembers his father.
He remembers the food his father’s servants eat.
He finally realises that he is distant from his father.
The question now is: what will the son will do? Does he think it is possible to return to his father?
Pope Francis ponders this dilemma when he notes that in the 21st Century, moving on from having merely denied the reality of sin in the 20th Century, it's seems characteristic of our own era to deny to possibility of salvation, to deny the reality of mercy.

We live in an era when our media and films and literature is almost entirely nihilistic, it believes in “nothing”.
Yes, it believes we've made a mess of our world. Yes, it believes that global warming will destroy it.
But little in the modern mindset has a belief in a “something” that gives reason for hope.
Pope Francis, in this Year of Mercy, notes that this is a denial of the reality of Mercy, a denial of what God has offered us in Christ.
In the parable, the Prodigal Son knew that he could go back to his father. We might note that he didn't realise the extent to which the father would accept him.
And God, our loving Father, wishes to accept us back, to offer His mercy, in just this manner.