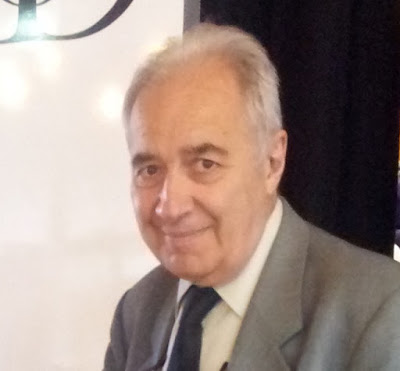 Lk 23:44-46.50.52-53;24:1-6
Giancarlo, as we all know, had a good sense of humour. In thinking of him, it is very easy and natural to remember him with a smile on his face.
Giancarlo, as we also know, liked England and admired the English. In fact, I can remember him during the parish youth pilgrimage to Rome that he organized, when the punctuality of the Roman buses was very far from being English punctuality, and we waited an hour and half for a bus that came “every 15 minutes” -but it was the Italian Giancarlo that was complaining about the Italians, not the English pilgrims!
So, we might feel it is fitting that he is being laid to rest here in England, not back in Italy.

But, the point I wish to remind you of today, is that the homeland that we think of for Giancarlo has to be a thought of a homeland that is neither Italy nor England, but heaven;
And our thoughts of Giancarlo have to reach beyond a smile, a sense of humour, or a happiness that is merely earthly, to the blessedness, the happiness that only heaven can bring.

It can often feel like there is never a good time to die, and with Giancarlo we might well feel that his departure from us was sudden -I think it was just two weeks ago that he was standing here at Mass, seeming in good health.
And yet, there are many ways in which this is a good time to mourn, namely, now as we are approaching Easter. Because the events of Easter are what give us hope, and hope for Giancarlo.

The Lord Jesus, as we heard in that Gospel text, died.
He came from His glorious heavenly throne, He who was life eternal.
He took human flesh.
And He allowed Himself to die. He hung on the Cross, as we heard, for three hours, and then breathed forth His spirit.
But that was not the end.
Three days later the tomb was found to be empty.
No one found His body, despite the Romans and Jews wanting to know where it was.
No one had motive for hiding His body -His followers were weak cowards, yet despite torture they never yielded in their affirmation that something that had never happened before in the history of the human race had happened in Christ:
He rose from the dead.
He was seen by both His followers, like Peter, and His enemies, like Paul.
The one who had said He could give “eternal life”(Jn 10:28) had shown in His own rising from death that He had the power to give what He promised.
THIS is what we hope now for Giancarlo. That, as Jesus said, “he who believes in me, though he die, yet shall he live”(Jn 11:25).

The Resurrection of Jesus gives us reason to believe He has the power to fulfill His promise.
While the death of Jesus is important for us to recall too. On one hand, to recall, as we will do shortly in our offertory hymn, that He did all this, suffered all this, out of LOVE for us -out of love for Giancarlo.
And, on the other hand, to see that as death was not the end for the Lord we have reason to hope that it is not the end for Giancarlo either.

Let us recall another thing, however, that gives us hope for Giancarlo, namely, the prayers of his family.
Our Catholic faith teaches us, following the pattern of the Jews of our Lord’s own time and the practice of the Church from its earliest days, that we should pray for the dead. And we pray for three things for Giancarlo:
for mercy in the judgment, when he meets the Lord;
for strength and consolation, to aid him in the purifications of purgatory;
and for speed, to help him reach the final goal.
Giancarlo is fortunate that he is able to depend on the assistance of his family to help him in this regard;
that he is able to count on their support to help him.
Not everyone is fortunate enough to have a family that will pray for them;
Giancarlo can truly be called blessed.

Before closing, let me note something for ourselves.
I have spoken about what we hope and pray for Giancarlo, but let us not forget about the Lord’s compassion for us who remain.
The Gospels record many times that the Lord Jesus wept, not least at the death of His own friend Lazarus. He came from heaven to earth to share our pain, to join us in our grief, and He is with you today, with you in your grief.
So, pray for Giancarlo. But also remember to pray for yourselves, and for each other, that the Lord will be with you and support you -He has experienced the tears you know.


To sum that up, Giancarlo had a smile and a sense of humour; and he had two homelands on earth, Italy and England.
But the homeland of heaven gives an even greater smile, a deeper joy.
And the reality of the Lord’s death and resurrection, that we recall at Easter,
with the assistance of our prayers,
is what gives us hope for Giancarlo, even as we weep to say goodbye.