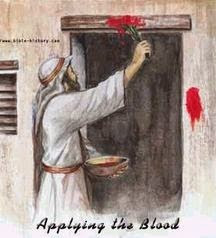 When people refer to “Passover” they typically mean the Jewish annual meal.
But that meal, as we heard in our first reading, is actually an annual commemoration of the ORIGINAL Passover in Egypt, by which the Jews were rescued from slavery. They were rescued from physical slavery and led onto a path towards a promised land. In fulfilment of that, Christ, the Passover of the New Covenant, rescues us from spiritual slavery to sin and brings us onto the path to heaven.

In both Passovers, the Jewish, and Christ’s in the Eucharist, the rescuing is by a sacrifice.
But, at first glance, both the Eucharist and the Passover seem to be about a meal rather than be about a sacrifice. However, in the Scriptures, and even in the pagan religions, these two went together: a meal and a sacrifice -you frequently ate the thing that had been sacrificed (but not always: there was a wide variety of Old Testament offerings). Just as, for us now, the Eucharistic sacrifice is also ordered towards us consuming it in Holy Communion.

(Pause)
More specifically, the Scriptures of the Old Testament teach that it is through “blood” that “atonement” is made for sins (Lev 17:11) and the rabbinic commentaries interpreted the blood of the Passover lamb as likewise being about sacrifice and atonement.
The blood of the Passover lamb was smeared on their door posts, and when the angel of death saw it he passed over them and spared them.
The blood of Christ, the New Passover, is spiritually smeared on us, so that the punishment that might otherwise come to us likewise passes over.

St Paul therefore says, “Christ, our Passover, has been sacrificed for us”(1 Cor 5:7). St John similarly portrays Christ as the lamb of the new Passover:
He records John The Baptist hailing Him as “the Lamb of God who takes away the sins of the world” (Jn 1:29);
He describes how Jesus was crucified, sacrificed, at the very moment that the lambs of the Jewish Passover were being slaughtered in the Temple (cf Jn 19:14);
And he describes how not a bone of Jesus was broken on the cross (Jn 19:32,33,36) just was the bones of the Passover lambs weren't broken.
Jesus is the Passover Lamb of the new Passover of the Eucharist, the Mass.

Let me focus this by noting that all this amplifies what is meant by St Paul’s words at the end of our second reading, that what is “proclaimed” in the Eucharist is the “death” (1 Cor 11:23-26) of the Lord.
The Eucharist does not “proclaim” His feeding us,
Does not proclaim His Resurrection,
Rather, as St Paul said, the Eucharist proclaims His “death” –because the Eucharist is the sacrifice, His sacrifice of the Cross, that takes away our sins.