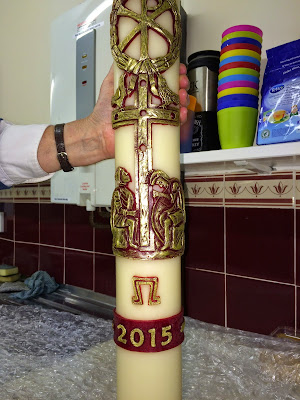 Baruch 3:9-15.32-4:4
I'm going to focus my Easter Vigil sermon on the image on the new Paschal candle, which this year I chose to be the image of two Roman soldiers asleep (which is one of the common images available for paschal candles).
This image, obviously, depicts the soldiers who stood guard outside the Lord’s tomb. The fact that they are asleep, oblivious to the stupendous reality that is about to burst forth from the tomb, is an image of two different ways of engaging with the event we commemorate tonight:
We can be alert and attentive, ready to welcome the Lord;
Or, we can miss what happens, miss salvation, let our Saviour pass us by.

What happened that Easter night was the most dramatic event since the creation of the world. Of course, many dramatic events had happened since the creation of the world:
The Fall of our first parents in Original Sin;
The Ten Plagues that were inflicted upon the Egyptians for their refusal to release God’s Chosen People;
The parting of the Red Sea – as we heard in our first reading;
And, moving along, the Incarnation, when the Almighty Creator took flesh in the Virgin Mary;
Later, the drama of Satan’s apparent victory over God-made-flesh when He was crucified, died, and was buried on Good Friday.
Then, it seemed, the drama was over. Evil had won. And God lay dead in a tomb.

When the Lord burst forth from that tomb, however, He showed that He had not been defeated.
Even in those thee days in between He has not been dormant: Scripture says that He went and preached to those souls who had died, who were waiting for Him to open the gates of paradise (1 Pet 3:19).
He had been active while the guards lay asleep.
He burst forth, and the victory of light over darkness was manifest, as our liturgy recalls tonight with the Easter fire and Paschal candle.

Light was created in the creation of the world.
Light burst forth in the Resurrection of the Lord.
The choice for us, now, as for every generation, is how to respond to that light.
We can sleep through it.
Or, we can let us lead us to something more. Our vigil reading from the prophet Baruch is offered to us for this purpose. It refers to “the light of the eyes”(Bar 3:15), it refers to Him who “sends the light”(3:33), and invites us to “seize” (4:2) that light and walk in its “radiance”(4:2) to light.
And what is this radiance Baruch refers to? It is the radiance of the wisdom, the “commands”(3:9), the “Law”(4:2) of the Lord.
In the context of the New Testament, we are to recall that it is CHRIST who is THE Word of the Father, THE wisdom, THE Law, THE way of life: “the way, the truth,and the life”(Jn 14:6), as He said of Himself.
So,bee are to take this radiance of resurrection light and let it lead us to even greater light.

To come back to those sleeping guards:
We can sleep through reality,
Or, we can wake up to it, let it lead us to the fullness He offers. He is “the light of the world”(Jn 9:5), He has proven Himself to be such by His Resurrection,
And if we turn to Him in His resurrected glory then He will lead us, as He has led others, from glory unto glory (2 Cor 3:18).
Posted by Fr. Dylan James, Catholic Priest, dual American-British citizen at 21:00