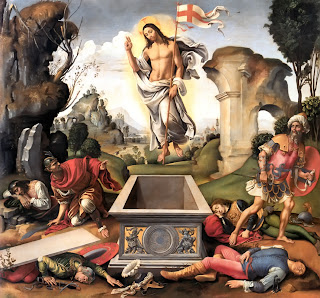 Col 3:1-4; Ps 117:1-2.16-17.22-24
We are gathered here today because of a change that happened 2000 years ago, a two-fold change: the first, in Christ; the second, in His disciples.
The first change, in Jesus, namely, His rising from the dead –that change tends to be our focus on Easter Sunday. Preachers typically point to the evidence for that change, such as: the fact that the tomb was empty and His body was no longer there, and that none of the various explanations that atheists try and concoct adequately explain why the tomb was empty. Preachers also point to the evidence of the witnesses, of the straightforward and plain style of their testimony, of the way that the witnesses record different details but all report what was clearly the same event -an indication of reliable testimony.

But the second change, in His disciples, is what I wish to focus on this morning, because it also points to us the change that must be produced in OURSELVES if we are to benefit from this incredible event. But, before I continue, let me point out that this also is another piece of evidence: that fact that the followers of Jesus were all changed from being fearful and despondent to being joyful and bold –this change in them demands an explanation. What suddenly made them so altered? The simple answer is that their encounter with the Risen Lord produced a change in them. And, consequently, the fact of this change in THEM is another piece of evidence pointing to the fact that there was truly a change in HIM –because it was their encounter with the changed Him that changed them.

So, this change in them, a change that altered them, as I said, from being despondent and fearful to being joyful and bold. However, the real point I wish to draw your attention to today is that this change was in fact only part of a deeper change within them, a change that we can rightly call the ‘re-creation’ of humanity, the re-creation of all those who seek new life in Christ.
We exist as what we call ‘Fallen’ humanity, in state of suffering, of sin, wounded in our nature. The re-creation of humanity offers us the Resurrected grace of Christ, a grace that can re-make each and every person who turns to Him and seeks to made new in Him.

Our Psalm said, “This day was made by the Lord, we rejoice and are glad”(Ps 117:24). “This day” meaning the day of Resurrection, a day that is “made” more than other days are made in the sense that it is the day of re-making, re-creating, such that, as Christ says in the book of Revelation, “Behold, I make all things new”(Rev 21:5).
Our second reading, from Colossians, also elaborated this theme. It said, “you been brought back to true life with Christ”(Col 3:1). This being “brought back to life” implies that you WERE dead, and for many that they STILL are dead –which is something of a problem for the many who refuse to recognise that there is a problem in this world, that there is a sense in which humanity is dead in sin. And, of course, even after the turning to Christ, we need to continually re-turn to Him as often as fall, as often as we succumb again to sin. Thus that reading from St Paul was calling on the Christians, again, to “look for the things of heaven”(Col 3:1).

Christ, the one Eternal Son of the Father, true God, came from heaven to earth and became also true man, and in His death and resurrection He has re-made man. Re-created every one of us in as much as we turn to Him and seek to have Him live in us. That change that can be in us, that change is what Scripture indicates happened in the first disciples by their encounter with the Risen Lord, and that change can also be in us, if we let it, if we recognise what happened this day 2000 years ago. “This day was made by the Lord, we rejoice and are glad”(Ps 117:24).
Posted by Fr. Dylan James, Catholic Priest, dual American-British citizen at 08:30