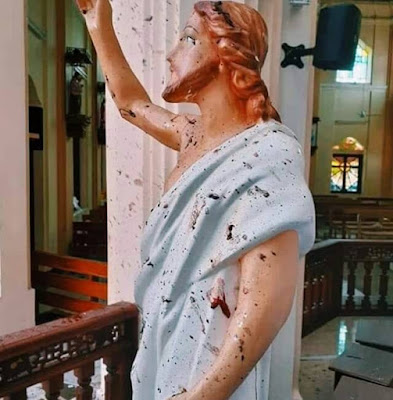 Jn 20:19-31
Most of us, I’m sure, have seen the reports of the explosions in Sri Lanka last Sunday.
I want to make two points about them. First, about the reality of persecution of Christians today.
Second, about the union of the Lord with His persecuted flock.

Meanwhile, for us in the West, there is another form of persecution. What Pope Francis has called a “polite persecution” that “takes away from man and woman their freedom, as well as their right to conscientious objection”(here).
Whether it is doctors and nurses being pressed to cooperate in euthanasia or abortion,
or teachers being told that their views must conform to the latest bizarre trends on gender theory.
Christians in Britain run an increasing risk of being told that we are free, but only when our opinions don’t contradict the politically correct secular establishment.
There was a very interesting article in the Catholic Herald on this in February: here.
The point is this:
To be a Christian, to be a Catholic, is to be DIFFERENT from the secular world around us.
We must expect to be different.
We must expect, also, to have varied forms of persecution to go with that.

Where, however, does Jesus stand in the midst of our persecution?
There was a photo of a statue of Jesus that has been widely circulated (see here), after one of the Sri Lanka bomb blasts.
The statue is splattered with the blood of the Lord’s followers.
But the statue survived, standing upright, erect and unbowed.
The image has been circulated because people have seen a symbolism in the statue standing erect, undefeated.
Let me, however, contrast that image with the account of the Lord Jesus in today’s Gospel.
In the Gospel, the Lord stands triumphant before them after His resurrection, but, He is showing them His WOUNDS
-He is not separated from our suffering, He is with us in the midst of it. He has felt everything we feel, and worse.

The Lord Jesus said, “If the world hates you, remember that it hated me first... Remember what I told you: ‘A servant is not greater than his master.’ If they persecuted me, they will persecute you also. If they obeyed my teaching, they will obey yours also. They will treat you this way because of my name, for they do not know the one who sent me.”(Jn 15: 18-21)
If our being faithful to Him leads us to suffering, then we can be sure He is with us in the midst of it.
He will triumph, as He stood triumphant when He appeared to His disciples after His resurrection.
We will triumph, if we stand with Him.
And in as much as we feel the wounds in our own hands and feet, in as much as we feel the weight of carrying the Cross, let us never forget that He is with us.
Posted by Fr. Dylan James, Catholic Priest, dual American-British citizen at 00:30