Christ alongside us, 3rd Sunday of Easter, Year A 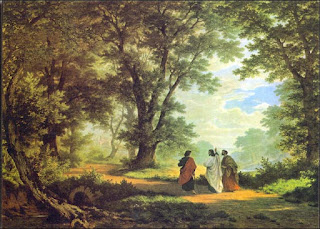 Lk 24:13-35
Today, 3rd Sunday of Easter, we’re still at this wonderful part of Eastertide when our Sunday readings are recounting or us the different Resurrection appearances of the Lord to His disciples.
This Sunday we have the long but significant account of the road to Emmaus, and I want to draw two applications from this:
first, that the Lord is walking at OUR side, even if unseen
-just as he walked by their side, initially unrecognised by them;
second, that the Lord has something to SAY to each of us
-just as He spoke to them, spoke to them so powerfully that they said, “Did not our hearts BURN within us as he talked to us on the road?”(Lk 24:32)
So, He walked by their side.
Now, let’s recall the context:
They were “downcast”(Lk 24:17);
They were focused on all that had gone horribly wrong:
How the great “prophet” they had followed had been “handed over” and put to “death”(Lk 24:20).
And, this point is very symbolic:
They were WALKING AWAY from it all, they were leaving the centre of activity at Jerusalem, and off elsewhere (to Emmaus).
But the Lord did not abandon them to that state:
He walked by their side, a LONG time it seems;
He LISTENED to their woes, their full description;
But then:
He taught them, enlightened them, showed them what they had failed to see:
They had seen “the things He said and did”(Lk 24:19) -His mighty wonders,
then HE explained to them that He was not just “a great prophet” (Lk 24:19) but the long-awaited “Messiah” (Lk 24:16) -that all the Scriptures were about Himself.
And His words to them transformed them, their “hearts [burnt] within” them (Lk 24:32).
And then:
He went in to “stay with them”(Lk 24:29);
and, in what would seem to be the first Mass after the Resurrection,
He gave Himself that he might “stay with them” in a new way.
For us, He does something very similar:
In this COVID19 lockdown, many us are “downcast” too (cf Lk 24:17);
many of us don’t RECOGNISE that the Lord, is NONETHELESS, still walking by our side
-this is His promise:
“I am with you always, yes, until the End of Time”(Mt 28:20).
Let me suggest something else:
The Lord has something he wants to SAY to you at this time.
He ALWAYS has something to say to us, something particular,
but when times are tough, unusual, weird, He particularly has things to say.
And this particular moment of history we are living through is unusual.  It's not unprecedented, for example, thinking especially of our situation with the Mass:
Churches have been locked before in times of plague:
St Charles Borromeo, the great Archbishop of Milan in the 16th Century, locked all his churches for 2 years due to plague (see here and here), even while he personally dedicated himself to caring for plague victims;
more recently, churches were locked during the 1918 Spanish Flu (see here).
Nonetheless, while not unprecedented, it is unusual.
The whole world is in a kind of silence now:
The media notes that people are sleeping more now,
people are dreaming more now,
some of us, are PRAYING more now.
This enforced silence wasn’t asked for:
I read of a nun someone comparing this to a 90-day silent retreat
-even for a nun that’s tough!
But, this must also be an opportunity:
The hectic pace of life has been interrupted -this is an opportunity!
What might God be saying to us, to me, to you?
He might be asking us to consider whether our lives have been focussed on the right things:
All my usual things are interrupted, what SHOULD I be focused on?
When this is over, what WILL I be focussed on?
He might be asking us to consider how we relate to different PEOPLE:
Many of us can’t meet family in the normal ways,
is that going to change how I VALUE them after this?
The Lord hasn’t forgotten you,
“though a mother forget the baby at her breast… I will never forget you”(Isa 49:15).
Let’s remember He is at our side, even if unrecognised.
And let’s try and listen harder to what He is saying to us.
Posted by Fr. Dylan James, Catholic Priest, dual American-British citizen at 00:30