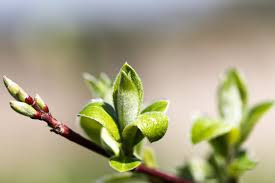 One of the things that lots of people are saying has been helping them these past few weeks is the good weather:
Flowers are blooming, the sun is shining, spring is in the air.

New life is something that gives us hope.
Nature is full of life, it has a natural dynamism.
There is a natural cycle of death and then new life,
and so as we worry about this crisis,
we see signs of hope that life will re-emerge.

There is an amazing natural power in life, that we see continually,
Of life arising after destruction
So often we see it:
After war and turmoil, societies rise again
After illness, the body recovers
After winter, spring comes.
Just NATURALLY speaking, as God has made nature, Life is powerful.
And this gives us hope.

My point to you today, however, is that Easter is something even MORE than this.
Easter is NOT just about natural cycles of dying and rising, of autumn then spring.
Easter is about a more definitive event, an event that changed everythin.g

What we recall today is:
There was a man from Galilee, 2000 years ago,
Who lived and breathed and walked among us.
And who yet showed Himself to be more than a man,
Who preached as no man can preach, “
“no one has ever spoken like this man”(Jn 7:46), said the guards who were sent to arrest Him (and returned empty handed!).
Who cured and healed and worked wonders like no man,
Who showed himself to be God among us.

And,
who gave Himself up to die.
And then, as He foretold,
to the amazement of His slow-to- understand followers,
ROSE from the dead.

So, as we look for signs of recovery amidst this crisis,
As we see signs of new growth amidst the spring,
Let us be clear that what was worked in Christ is a new life BEYOND such categories.
Easter is about something even greater than the new life of spring.