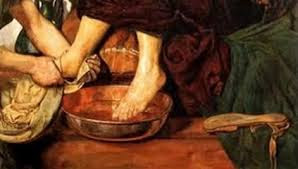 Jn 13:1-15
Tonight, for obvious reasons, I won’t be washing anyone’s feet -because there are no feet here except my own!
It does mean, however, that this became, in MY mind, an event when I was thinking even more clearly on the connection between Mass and the feet washing.

Foot washing is about service,
about that act of giving and loving whereby we do for another person something that is not pleasant for ourselves.
-nobody likes feet!

These past weeks,
amidst this lockdown restricting our lives;
amidst this fear of the virus
in these past weeks most of us have felt the STRETCH that comes with serving and giving in ways that we don’t normally:
Helping people in ways we don’t normally need to;
Being patient with others when cooped up for so long together;
Being bored in our isolation;
-this is a time to test and develop how giving we are.

The Mass is about giving and service too, in fact, EVEN MORE than our giving and serving.
Now, you can’t get to Mass at this time,
so, you can either forget all about the Holy mass,
or,
you can, especially on this night, reflect on how your service and giving are a participation in the giving of the Mass.

How did the Lord Jesus give Himself and serve?
Most dramatically, He gave Himself on the Cross,
as the sacrifice that takes our sins away.
This was an act of SERVICE,
as he said of Himself, He “did not come to be served, but to serve, and to give his life as a ransom for many”(Mt 20:28).
This was a GIFT, freely given, of Himself for us,
as Scripture says, He “gave Himself up to death”(Eph 5:2)

What we as Catholics PARTICULARLY remember on THIS evening,
is that His giving on the Cross is linking with His giving in the Mass.
He gives Himself in the Mass, in Holy Communion:
He comes as the food for our souls.
BUT
This is only the secondary aspect of the Mass.
The primary reality of the Mass is its relationship to the sacrifice of the Cross,
As St Paul teaches, when we offer the Mass, “you proclaim the Lord's DEATH until he comes”(1 Cor 11:26)
The Mass is the perfect prayer, the perfect act of worship.
It was established by the Lord Jesus:
The night before He died, at the Last Supper,
He instituted a ritual that would make present, for all time,
the sacrifice, the prayer, the worship, He knew He would offer the next day on the Cross.

That prayer, that sacrifice, that GIVING, becomes present on our altars.

Back to our situation:
We are being called to serve and give in unusual ways:
Am I allowing myself to ACCEPT doing the unusual?
Am I being PATIENT with others and the situation?
Am I OFFERING in love my frustrations to God, uniting my little cross to His big Cross?