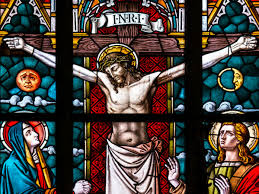 Jn 18:1-19:42
Today, in my Good Friday reflection for you, I want to consider:
In my flesh, is God absent or present?
When I am weak, is He absent or present?
Our world is seeming pretty ‘weak’ right now, pretty much experiencing ‘the weakness of human flesh’.
Is God present in that? or absent?
We’ve just heard the Passion narrative from John’s Gospel.
As we hear the horror of that event, there are two extremes that are put before us by St John’s account of the passion:
the extreme of the kingship and glory of Christ,
and the extreme physicality of the suffering to which He chose to lower Himself for our sakes.
These two themes run throughout John,
and they tell us something incredibly important for how we can find the Lord in our own experiences of being low and weak in our fleshy existence and suffering.
At the start of St John’s gospel He says of the Lord Jesus, that
God “the Word became flesh and dwelt among us, full of grace and truth; we have beheld His glory, glory as of the only Son of the Father”(Jn 1:14).
“The FLESH” is something that St John notes repeatedly about the Lord.  And his account of the Passion includes many small physical details that the other Gospel writers pass over:
He records that the Lord is not only insulted and mocked,
but that He is physically “slapped” in the face.
He records not only that the Lord was led out to be crucified,
but that He physically “carried his own cross”.
He records not only that the Lord was crucified,
but he explicitly refers to the “nails” that went through His hands (Jn 20:25, noted after His resurrection).
He records not only that He hung on the cross,
but the physical detail that He cried out, “I thirst”.
He records not only that He died,
but that the physical detail of His side being pierced by the spear, showing His death by blood and water flowing from His side, with “not one bone of His broken”.
When St John tell us that God has taken “flesh” we are left in no doubt that this includes all the PHYSICAL reality that OUR own flesh can suffer and experience.
HOWEVER, at the same time, St John is also clear about the “GLORY” of the Lord being manifested in all of this.
The glory of the Lord is not just something to shown in bolts of lightening,
in fire on Mount Sinai,
or in the parting of the Red Sea waters.
Rather, the glory of the Lord is shown in how He has chosen to accept our weakness,
chosen to take our flesh.
It is His ‘glory’ to be manifested not in worldly splendour
but in manifesting Himself as intimately involved in our weakness, our lowliness, our flesh.
He is not a God distant from us,
but a God who is manifested and glorified in our weakness.
“Glory” in weakness
–now this might seem a contradiction.
What enables His being weak to be a manifesting of His ‘glory’ is the fact that He freely CHOOSES it,
that He uses His POWER to enter into our weakness.
To turn, again, to the details that we hear recorded in St John’s account,
his account notes details that point out very explicitly the fact that He is in charge,
that He CHOOSES to lower Himself for us:
He notes not only that soldiers came to arrest Him,
but that they first fall to the ground when they meet Him
-they only arrest Him when He allows it.
He notes that, before Pilate,
He declared Himself a “king”
-though not of “this world”.
He is dressed in a purple kingly robe,
though only to be mocked by it.
He is crowned with thorns,
though, again, only as a form of mockery.
He repeatedly declared a King by Pilate:
before the crowd,
and by the inscription written above Him on the cross.
And His final recorded words before He “gave up His spirit”
were words indicating it had all been a work He was wishing to fulfil:
“it is accomplished”.
He is king.  He is in charge.
But, He uses His kingly power to lower Himself
and share the weakness of our flesh.
What this means, for you and for me,
is that in our weakness,
in our experience of the “flesh”, HE IS WITH US.
When I am insulted and undignified,
He has granted me dignity,
the Almighty is with me.
When I am weak and defeated,
He offers me strength to be my victory.
And when our world is weighed down my the burden of its current affliction,
He is here among us.
“The Word became flesh, and dwelt among us”(Jn 1:14)
Posted by Fr. Dylan James, Catholic Priest, dual American-British citizen at 15:00