National Pastoral Letter from the Bishops of England and Wales

This Sunday there is a pastoral letter from the Bishops of England and Wales to be read at Mass in every church across the land. The letter concerns the new translation of the Mass: 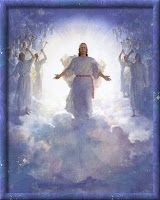 Jn 14:1-12
I'm only going to offer a brief for today because we have an appeal at the end of Mass on behalf of the Bishop’s new fund for training seminarians.

The thought I want to offer you today is the reason why the gospel text we heard today is given to us to consider during the Easter season.
“Do not let your hearts be troubled, trust in God still and trust in me"
Now, the reason why this is an issue, the reason why a question could arise in your head, is that the words of the Lord that we heard in that gospel text were not words He said AFTER He rose from the dead on Easter Sunday -in that sense, they are not words that belong to the EASTER season. He said these words before He died, at the Last Supper.
And yet, the church calls on us to reflect on these words NOW in the Easter season.

So, why did it make sense to reflect on these words in the light of His Resurrection?
And the simple answer is that the power of these words takes on a new significance when they are read in the context of His Resurrection.
What the Resurrection manifests to us is that He has the power to do what He said. He has the power to lay down His life and take it up again (Jn 10:18), as He said.
And so, if we return to the words He said before He died, if we return to though promises He made when He seemed to be in weakness, looking at those words again in the light of the Resurrection should mean that we have confidence in His promises.

He HAS the power to fulfil His promises. He has shown that "the Father and I are one"(Jn 10:30). And so we should have a renewed sense of comfort in hearing His words, “Do not let your hearts be troubled, trust in God still and trust in me".
Posted by Fr. Dylan James, Catholic Priest, dual American-British citizen at 00:23 No comments:

No sermon text this Sunday because the Mass was by a visiting priest.
Posted by Fr. Dylan James, Catholic Priest, dual American-British citizen at 00:11 No comments:

Lk 24:13-35
In all of our Easter Gospels we hear of a great deal of movement and running. In today's we heard about how the two disciples, after a long walk, and despite the fact that it was then nighttime, and no doubt dangerous to travel, hurried all the way back to Jerusalem. In each of the recorded appearances of Our Risen Lord, His appearance produced a radical change in the persons He appeared to. And the question of what exactly that change was, is a question of great importance if we are to understand the relevance of these appearances for us today.

One thought that can help to focus us on the nature of that change, is to think about the one great person that Gospels do NOT record Jesus appearing to, and that is His mother Mary. And it is particularly relevant for us to do so in this Month of May, the month dedicated to Our Lady.

Most Catholic saints and scholars down the ages have argued that, even though the Gospels don't record it, Jesus did actually appear to Our Lady, and did so before He appeared to anyone else, and I think that would be only natural. Any mother would want her son to appear to her, and being the perfect son, I'm sure that Jesus did appear to His mother.

But others argue that there was no NEED for Our Lord to appear to Our Lady, because her faith was so strong that she knew He would rise from the dead, she didn't NEED to see Him the way that the others did. And Pope John Paul II refers to this theory in his book, Crossing the Threshold of Hope. The Blessed Virgin Mary had solid hope, she had pondered everything in her heart (as the Gospels repeatedly tell us), and she KNEW He would rise again.
One thing we can be certain of, if Our Lord did appear to her, it was an appearance unlike the other encounters: An event of great joy, but not one that radically changed Our Lady.

In contrast, the appearance to the two men on the road to Emmaus had a dramatic effect. We heard their own words of where they had placed their own hopes: in a worldly political messiah who would save them in a worldly way. Christ had to explain the whole of the prophets to them in order to make it clear what He had REALLY come to do.
Their hope was changed by the appearance of Our Lord, to a hope in something greater still. The eternal hope of Our Lord Himself.

For ourselves, that should raise the question of where it is that we put our own hope. Do we live for day to day hopes of passing worldly pleasures? Or is the hope of our lives underwritten by the everlasting and eternal hope of Christ? Because the society we live in today still looks to a fulfilment and hope that is oriented around this world alone, as if this world alone could satisfy our desires.

Our Lady knew better. From the moment that the Angel Gabriel appeared to her and asked her to be the Mother of God Himself, she knew that true hope was to be found in the child that she was called to bear, and it was pondering on that that enabled her to keep faith and hope even at the foot of the Cross.

The example of Our Lady shows us what the Risen Lord had to explain so fully to the men on the road to Emmaus, shows us the dramatic change of worldview that happened in each person that Jesus appeared to: the change to realising that the true hope of the world is to be found in Christ Himself.
He Himself is the one that fulfils every promise and prophecy and expectation of the human heart. Our faith and hope in the person of Christ, God among us, our true salvation, the one who triumphs over sin, evil and suffering, is the only hope that puts all other hopes into a true perspective.

And that same Christ, the one who is still our hope today, who came to those disciples in the breaking of bread, will come us here today in the Eucharistic sacrifice of the Mass.
Posted by Fr. Dylan James, Catholic Priest, dual American-British citizen at 00:05 No comments:

The royal wedding has been the big news item of the week. As Catholics, however, we have our own big news item this week, this Sunday in fact, but it's possible that you might not have heard about it in the news: Pope John Paul II is being beatified in Rome this Sunday (beatification being the penultimate step on the road to being formally declared to be a saint) -it is already six years since Pope John Paul II died.

I'm too young to remember it myself, but in 1978, when the young Polish Cardinal was elected as Pope John Paul II, his first words to the world from the Papal balcony were, "Do not be afraid". These words repeated one of the Easter greetings that Our Lord used to His disciples after He rose from the dead (Mt 28:10), a greeting that characterised Pope John Paul II’s Easter faith.

The risen Jesus greeted His disciples with the words "do not be afraid" because He knew that they WERE afraid. This greeting of Jesus, however, is about much more than the specific fear of seeing a man that they thought was dead. Rather, the greeting of the risen Jesus is a greeting that tells us something about how we should respond to ALL of the things in life that PREVIOUSLY had been causes for fear –because by Jesus's triumph over death, suffering, and evil, He has given us a reason to not have fear.

Fear is our reaction to some future evil (St Thomas Aquinas, ST I-II q41 a2) –because we recognise that it will bring us suffering and pain.
And there are a great many things in this life that we know can bring us suffering.
But surely, underneath all of these causes of fear, is the deeper fear that somehow we are ALONE in the face of what confronts us, that somehow we are powerless to overcome the evil that confronts us, that somehow the existence of evil signifies that God is not active in our lives, or at least that He is not active in the face of this evil that assails us.

The historical event of the Resurrection of Jesus from the dead, and, more specifically, of the guiding hand of the Almighty working through the tragedy of the Crucifixion in order to achieve not only our salvation but the further glorification of the Son,
this event gives us reason to hope that the same God who was active in that suffering will be active in our own suffering too.
And so the Easter greeting of the risen Lord, "Do not be afraid", is a greeting that is meant to resonate at the level of every single fear that lies within us.

Of course, we all know that it is not easy to have faith rather than fear when we face suffering. But this, I want to point out to you today, is one of the ways in which we see the greatness of John Paul II.
John Paul II, who the church now calls "Blessed John Paul II", was a man who had experienced the evil that this world has to offer. He had lived through the wartime Nazi atrocities wrought on his beloved Polish homeland. He had endured seeing these be supplanted by the afflictions of the atheist tyranny of Soviet communism.
We might well expect such a man to have a rather timid and persevering sort of attitude, however, his faith was such that he came to experience the reality of God's power being manifest PRECISELY IN human weakness, precisely where it is needed the most, precisely in the face of evil.
And it is the triumphant Resurrected power of the Lord in the midst of weakness that the great Pope John Paul II identified as the action of "mercy" (c.f. Dives in misericordia, nn.7-8).
It was because He recognised the action of God in weakness as “mercy” that He responded to the apparitions of St Faustina to have this 2nd Sunday of Easter declared to be “Divine Mercy Sunday”,
and it is the recognition of this connection between mercy in weakness and the Resurrection power in the face of weakness that led Pope Benedict to chose to beatify Blessed John Paul II on this very day.

The application of this to our own lives is a transforming act of Resurrection faith that we need every time we experience fear in the face of some evil before us. Let us remember the victory of Christ, and remember His resurrection greeting, "Do not be afraid".
Posted by Fr. Dylan James, Catholic Priest, dual American-British citizen at 00:28 No comments: