We heard in our first reading how the great prophet Jeremiah was sentenced to death by the king. And in fact almost all of the Old Testament prophets were deeply unpopular men, and many were martyred. Jeremiah was unpopular because he told the people they were sinning by breaking the commandments of God, and he warned them that they would perish in destruction if they did not repent. They didn’t repent, Jerusalem was destroyed, and the people were taken off into slavery.
And Jesus did the same: He also taught people about sin, and demanded that they change their lives, and He warned them about the eternal fires of Hell (Mt 10:28; Mt 13: 41-43; Mt 25:31-46; Mk 9:46; Lk 16:22-28)(–a warning as real today as it was then. And such warnings do not make a man popular. And as the great fulfilment of the line of Jewish prophets, they killed Him just like the killed so many of the prophets.

Jesus came to bring division, to bring “not peace but a sword”(Mt 10:34), not because He loves division, but because He wants to bring about a deeper everlasting peace –a sharing in the peace of Heaven. There is ALREADY a division within each of us, a division caused by the sinful inclinations of our hearts. True peace with God only comes by facing and overcoming that division.
We must do this in our own hearts, but also with others, and this is why Jesus warns that He comes to bring division within family and friends.

If we would cling to Christ, who is our salvation and hope, then we must reject the ways of the world, and we must call on others to do the same. And if we love our friends and family then we must call on them to live the moral life, BECAUSE we love them, not because we do not. Even when this brings division.

Such things do not make us popular. People can deride us as kill-joys, just as they derided Jeremiah and our Lord Himself. But if we cling to Christ’s teaching then we can also expect to cling to His consolation and strength.
I might note, that we must also always seek His guidance in what we say. We must seek not to be imposing our SELF-righteousness on others, but to be calling them to GOD’s righteousness. If it’s GOD’s will, and it is, then HE will help us find the time and the place to say the right thing –but we can’t just take that as an excuse to say nothing.

As we heard in our second reading, St. Paul says, “Let us not lose sight of Jesus”(Heb 12:2), let us keep running steadily in the race of faith that we have begun. Many people do give up in running the race, because the demands seem tough, and sometimes it’s hard to see how it’s possible to live them. But anything good takes working at, and there are many sacrifices needed to win the crown of eternity. “Think of the way [Jesus] [like Jeremiah and the prophets] stood such opposition from sinners and then you will not lack for courage.”(Heb 12:3)

But we must also never forget that the struggle to cast off sin starts and ends in our OWN hearts, it is THERE we must bring division, so that we can throw off the sin that clings so easily to us(Heb 12:1). And if we do so, then the blazing fire of His love will blaze in our own hearts, in the hearts of all freed from sin, and bring us all to perfection. 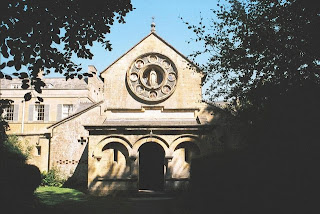 What of ourselves? Well, surely, the thought of these martyrs should inspire us to be more devout and focussed on these sacred mysteries in the Mass, to treasure what is on offer here, to re-commit ourselves to it as something we would be willing to suffer rather than lose. So, let us think of their sacrifice, think what they value, and strive to value and treasure the same.
Posted by Fr. Dylan James, Catholic Priest, dual American-British citizen at 11:00 No comments: Links to this post 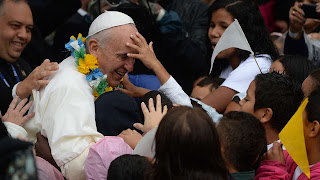 Col 3:1-5,9-11; Lk 12:13-21; Eccles 1:2,2:21-23
Pope Francis, as I'm sure we're all aware, has been very much in the news the last week and a bit, with the youth gathering around him for World Youth Day in Rio. And its been great to see the Church enjoying some good publicity. An estimated three and half million joined him for the main Mass -a number that is almost impossible to visualise! But the reports also indicated the Pope doing other profound things, things more characteristic of the particular message his pontificate has been focussing on, like his visit to the slums in Rio, meeting the poorest of the poor.

The poor, and poverty, has been a theme Pope Francis has spoken about from day one of his pontificate. He has set a personal example of a simple lifestyle in many aspects of his own living: declining to use the standard papal apartments, riding in a bus with the other cardinals rather than in a separate car, and many other such things. He has done these things consciously seeking to set an agenda, because he wants, as he has put it: "A poor Church for the poor".http://www.bbc.co.uk/news/world-europe-22551125

"A poor Church for the poor". What does this mean? Well, its doesn't just mean the priests.
It DOES mean the priests too, of course, and I know many priests, like myself, have been thinking hard in recent months about our various possessions. Reexamining our things. I wanted some new shoes because these have some holes, but I've decided I can keep them longer still. I wanted a new watch, but decided against it. These and other such questions need to be part of an ongoing and continual examination of my life.
A priest needs to live simply, as canon law has always put it, clerics must "avoid everything that smacks of worldliness"(Canon 282.1). They must pursue "simplicity of life"(Directory on the Ministry and Life of Priests, n.67). St Francis de Sales would add that priests shouldn't be scruffy -our Lord went to His crucifixion in a garment nice enough that the centurions cast lots for it rather than rip it up. But things can be simple without being scruffy. I can have a clean ironed shirt even if it doesn't have cuff links.

But, to repeat, Pope Francis isn't just talking about the priests. He hasn't said, "poor priests for the poor" but "a poor Church for the poor", and, this means YOU too.
Our Scripture readings for Mass today speak about wealth. What the Pope is talking about is not new -it is in the Bible, it is in our Catholic tradition. But it is something that we can easily try to ignore. Yes, I go to Mass on Sunday. But my choice of car, choice of house, choice of the food I buy -do I make these choices in the same way that unbelievers make them? Or does my being a Christian change what I buy? Change what I choose to own and what I choose to give away?
To remind you of a criteria I offered you a couple weeks ago: Does the amount of money I give to poor, that you give to the poor, does it actually change how you live? Have I given away enough that there are actually things I would have liked to have bought that I can't because I've given the money away?

Our first reading and our Gospel text focus us on the futility of the pursuit of wealth. Both readings focus on the issue of death casting wealth as meaningless. "You can't take it with you when you go", as the old saying goes. Or as one of my favourite Country Western songs puts it, "I've never seen a hearse with a luggage rack"!

Let me close, however, with the different angle that's put on this by our second reading, which draws our attention to the issue of what the eyes of our hearts are focused on. Do they look to heaven like a believer? Or simply to earth, like an unbeliever? Am I yearning for heaven or am I yearning for this-worldly things?
If I am this-worldly, then good food, good shoes, a comfortable sofa, a nice house, my favourite wine -these things will be unduly important to me. I will invest disproportionate time and energy in their pursuit.
In contrast, Colossians tells us to "look for the things of heaven, where Christ is". Acknowledging the reality of heaven changes everything. But it only changes everything if I truly acknowledge it.

Let us take heed of Pope Francis's call for us to become "a poor Church for the poor". Let us ask ourselves whether we are giving so much that it actually hurts. And, especially if we struggle with fear at the thought of losing worldly comforts, let us look to the things of heaven, the riches that last, the riches that you can take with you when you go.