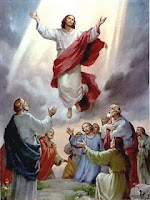 In thinking about what to say about this feast this year I thought I’d point out the significance of the Ascension and the Resurrection being 2 different things. What I mean is this:
it was logically possible for Our Lord, when He rose from the dead, to IMMEDIATELY ascend to the Father in Heaven.
But He didn’t.
Instead He spent 40 days on earth first.
Now, my point to you today is that He did this for a reason, and recalling that can help show us the significance of this feast.

The reason He stayed on earth for 40 more days was for OUR sake, not His. And we heard the major part of that reason spelled out for us in our first reading from the Acts of the Apostles: after He rose from the dead He not only rose but “SHOWED Himself alive after His Passion by many demonstrations for forty days” (Acts 1:3). i.e. it wasn’t just enough for Him to triumph over death but His disciples needed to KNOW that He had done so. As Pope Leo the Great put it, so that those who had been bewildered by His Passion, and initially doubted His Resurrection, might be convinced.

But there was still something more that they needed to know, that they needed to have demonstrated to them, and that was seeing, as our Gospel text put it, the fact that when He ascended it was “at the right hand of God [that] He took His place”(Mk 16:19).
That phrase, “the right hand of God” is one of those that might mean little to us yet to those who heard it they would have recognised it as a title indicating divine majesty for the one who sat there.

And there is another significance in this: by taking our human nature up into the divinity and into divine glory He also gained FOR US a share in the same if we are united to Him, if we are His followers, if we are partakers in the Divine nature by being sharers in His death and Resurrection.
It was for this reason that the letter to the Ephesians (that we heard in our second reading) spoke of us being called in “hope”(Eph 1:18). This is what the Collect [Opening Prayer] at Mass today indicated when it said, “where the Head has gone before in glory, the Body is called to follow in hope”.

So, to return to my opening point, the reason today’s feast is important is that we are recalling that all of this not only happened but that it was SHOWN to us, shown to us that we might know about it, and place our hope in it.
He did not simply rise from the death and instantly vanish into heaven,
but rather, for 40 days He showed Himself by “many demonstrations”
that we might have confidence in the reality of His Resurrection,
and confidence in the reality of His Ascension to heaven,
that we might strive to live so that we might one day join Him there.
Posted by Fr. Dylan James, Catholic Priest, dual American-British citizen at 00:05 No comments: Links to this post 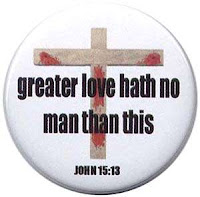 Jn 15:9-17; 1 Jn 4:7-10
Most of us have had the experience of finding out something new about someone, and being surprised.
Sometimes we can come across an act of generosity or kindness in someone, a hidden act that others don’t see, that we hadn’t seen ourselves, and we realise that there was more to the person than we had bothered to notice before.
And it can change how we then THINK about that person in all kinds of other things, and change how we ACT to towards that person too.

I want to suggest to you a parallel in how we do, or do not, know God, and know Him in Jesus Christ. Because seeing how God has acted in Christ should change how we THINK about Him, and how we ACT towards Him, and towards others.
This, I’d like to point out to you, was the experience of His apostles after the Resurrection.
They had been with Jesus for 3 years, but He had somehow not gotten through to them. The Gospels record the Twelve as petty, rivals with one another as to who was the greatest (Lk 9:46), small-minded in turning away the children who came to see Him(Mt 19:14), and repeatedly “slow to understand”. In particular, they “did not understand”(Mk 9:32) His prophecies that He would be crucified and rise from the dead.

However, after Jesus rose from the dead everything changed. The Church gives us, throughout the Easter season, readings like our first reading from the Acts of the Apostles. It describes how the Twelve behaved AFTER the Resurrection, going out and converting the nations, full of wisdom and teaching, going about doing good. They were changed by the action of the Holy Spirit. But, and this is my point today, they were changed by what they KNEW of God –what the Resurrection had shown them.

The Resurrection of Jesus from the dead was an act unparalleled even amid all the miracles in history of the God’s actions with His Chosen People the Jews. It was an act that showed that Jesus was more than just a prophet. It made sense of all kinds of things that He had said before His death but His disciples had not then understood, but that they LOOKED BACK and understood after He rose.

Let us consider the words we heard read in today’s gospel text, the words where Jesus said, “A man can have no greater love than to lay down his life for his friends.”(Jn 15:13)
When Jesus died and rose from the dead, and fulfilled His prophecies of doing just that, His disciples came to realise a great many things about Him:
Realised He was the long-awaited and prophesied Messiah;
Realised He was the Only Son of God;
But, also, they came to realise something MORE about the nature of who GOD is in HIMSELF, namely, as we heard in our second reading, that “God is love”(1 Jn 4:8).
They realised not only that Jesus had a love for us such that there is “no greater love”, but also that this is the love in God Himself, in the three Triune persons, such as Jesus spoke of the Father loving Him (Jn 15:9) and Him the Father.

We, of course, have heard this so many times that it can easily mean almost nothing to us, these can be words that pass right past us. But it was new to them. And it changed them. Changed not only what they knew, but as I said, changed how they behaved, so that, as we hard St John say in our second reading, “Anyone who fails to love can never have known God, because God is love”(1 Jn 4:8).

In as much as we fail to love, we show that we have not truly known Him.
But, if we look to see Him more, to KNOW Him more, then, to return to my opening illustration, just as learning something new about someone can change how we think and act towards them, if we truly ponder what Jesus has DONE for us we can come to know and love Him in a deeper way.
“A man can have no greater love than to lay down his life for his friends.”(Jn 15:13)
Posted by Fr. Dylan James, Catholic Priest, dual American-British citizen at 00:05 No comments: Links to this post

on Jn 15:1-8.
This Sunday I am 42 years old, and I’ve been thinking this week about what lessons I’ve learned through life so far, and, I’m pretty sure, the greatest lesson I’ve learned through the process of living life has been the lesson of failure, that I can fail and do fail. When I was young I used to think I was somehow indestructible and self-sufficient –that failure was not an option for me. Yet, I did fail, have failed, continue to fail, daily. And this is a lesson worth learning and worth learning from.
And failure is a fact of life that we ALL know about in all sorts of different aspects of our lives: in business, in our life ambitions, in love, in the family, and of course, as Christians we all know the failure of sin when we fail to live the demands of the Gospel.

But by itself the lesson of failure is not a great lesson, it's just a fact like any other fact in life. Possibly just a BAD fact that could lead us to despair. Failure only becomes a great lesson when it is seen in the light of Christ.

Christ told us in today's gospel that, "cut off from me you can do nothing"(Jn 15:5), and THIS is the real lesson that failure teaches us. We can all tend to think, and act, as if we were self-sufficient. As if, by ourselves, we could succeed in life. But if a branch cuts itself off from the tree then it withers and dies and is only good to be thrown on the fire. Christ reminds us that it is only if we are grafted onto Him that we can really succeed.

If Christ is the life at work within us then everything that we do will be animated by that person who is Himself the "fullness of life", the person who is the purpose and meaning of life. A life filled with Christ will be better able to be content at work, better at loving and living with our families, and ultimately, a Christ-filled life will be able to reject sin and follow the Gospel.
(pause)
We know that Christ can still be at work in us even when we have PARTLY forgotten Him, but we also know that when we don't keep Him in mind we can run the risk of allowing obstacles to Him to build up in our lives, obstacles like selfishness and pride.
And it's because God wants to remove those obstacles that He prunes us –to use the imagery in today’s Gospel.

(pause)
When I was a child I could never understand why, every winter, my parents used to ruthlessly prune the fuchsia bushes in front of our house. When they'd finished there would only be a few bare stalks left. Later I came to realise that this was necessary if they were to grow in the spring.

The pruning of failure can feel like the touch of death, a cold winter that kills off life. But with faith, failure can become an opportunity for new life, because failure can remind us of our dependence on God, and when we renew our reliance on God then we allow His life to be the life of our souls.
Christ reminds us today that "every branch that does bear fruit He prunes to make it bear even more"(Jn 15:2). Pruning hurts, but it is only if a plant is pruned that it is able to grow. And if a plant is not pruned then eventually the little fruit it has will perish.

There are many times in life when we are made aware of our limitations and failings, and these are the times when we experience the simple truth that apart from Christ we can do nothing. But the reverse side of this truth is the fact that WITH Him we can do all things, bearing fruit in plenty. This is the humble and cheerful truth that should console and invigorate us when we experience difficulty.
Posted by Fr. Dylan James, Catholic Priest, dual American-British citizen at 00:03 No comments: Links to this post