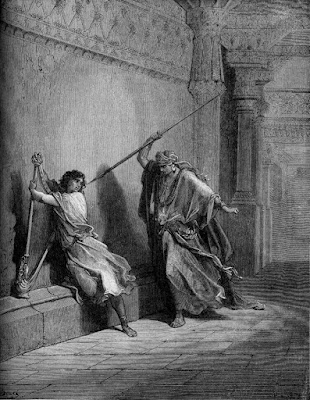 Lk 6:27-38; 1 Sam 26:2-23
Today’s Gospel text gives us one of the most beautiful and yet difficult Christian teachings: to love your enemy.
I want to immediately add that I think its also wonderfully PRACTICAL, rooted in real life:
The Lord does not tell us not to have enemies, rather, He tell us how we should behave towards them.
Having enemies is almost an inevitable part of life: your mother-in-law, the neighbour who just cut down your hedge, the boss at work who makes unreasonable demand and is itching for an excuse to fire you
-at different times in life, almost all of us will have had someone that relates to us as “enemy”.
But how are we to act towards them?

We’ve all heard the saying, “An eye for an eye”, about revenge.
It’s the teaching in the Old Testament -though what is often forgotten is that it was always intended as a LIMITING action: no more than an eye for eye.
The teaching of the New Testament raises us to an even higher standard:
To “love your enemy” -but what does that mean in practice?

Let me return to what a said about love a few weeks ago (4thSunOrdTimeYrC), but from a different angle.
I said that love is not just a feeling, it’s a decision of the will.
If someone is my enemy then I am very unlikely to FEEL loving towards him, but, I can CHOOSE, as a decision of will, to ACT in a loving way towards him.

We were given an example of this in our first reading, with Saul and David.
Who were David and Saul? Saul was king. But who were they to each other?
Saul was David’s father-in-law, and he was hunting down his son-in-law to kill him.
(Saul was neither the first nor the last father-in-law to hunt down his son-in-law.)
But how did David act towards Saul?
We might note, as an initial observation, that he acted justly, he observed the minimum required by God’s law, and he did not kill God’s king, “the Lord’s anointed” (1 Sam 26:23).
More than this, however, as the full account in the book of Samuel describes, he acted in a way that was loving to Saul:
He did not damage Saul’s position as king;
He did not damage Saul’s relationship with his daughter (David’s wife, Michal);
He did not damage Saul’s relationship with his son (David’s best friend, Jonathan).
He could look and see what was good FOR SAUL, and he acted in a way consistent with that.
He wasn’t reconciled to Saul.
He didn’t become friends with Saul -they remained ‘enemies’, in that sense.
But, in how he acted, he chose what was good for his enemy, he thus LOVED his enemy.

You and I are called to do the same:
whether with your brother, your mother-in-law, or the disagreeable man who lives next door.
First, if possible, we should seek forgiveness and reconciliation -though that’s a different sermon.
Second, if that’s not possible, and someone is clearly going to be our “enemy”,
then, we need to remember that this person is known and loved by God,
We need to remember that God wants and wills what is GOOD for that person -and that means we need to honestly THINK about what is truly good for that person.
And if we do, then not only will we have behaved “beautifully”, not only will be have behaved in a way that will bring peace to ourselves, but, as the Lord Jesus promised, in the final analysis, from God, “the amount you measure out to others is the amount you will be given in return”(Lk 6:38).
Posted by Fr. Dylan James, Catholic Priest, dual American-British citizen at 00:30 No comments: 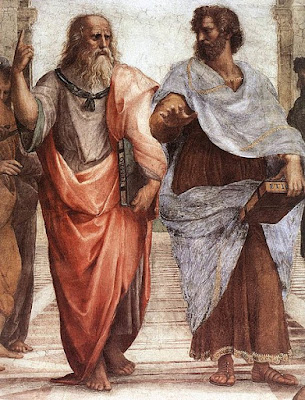 1 Cor 15:12.16-20; Lk 6:17-26; Jer 17:5-8
Today I want to reflect on St Paul’s teaching about the importance of the physical reality of the Resurrection, as we heard in our second reading.
The Corinthians that St Paul was writing to lived in the midst of Greek philosophy.  The descendants of the philosopher Socrates valued the mind and the soul, but had a low opinion of the body.  In fact, Plato spoke of the body as being a prison for the soul, something that the soul wants to be liberated from.  For these Greek philosophers, the whole purpose of philosophy was to escape the body.  Death, as a consequence, was seen as a great release, a release from the prison of body.
Imagine, therefore, what these Greeks thought when the early Christians spoke about a resurrection of the body, of the soul be re-united with the body.  To the Greeks, this would sound like being re-imprisoned.  The early Christians came along and spoke of the Lord Jesus being resurrected, and the Greeks laughed -not so much because they thought it unlikely, as because they thought it undesirable (c.f. Acts 17:18).
St Paul, as we briefly heard, was writing to those who were “saying that there is no resurrection of the dead”(1 Cor 15:12) -he was writing to those under the influence of these Greek philosophers.
St Paul was emphatic that everything hinges on the physical resurrection.  In fact, a very large part of the whole first letter to the Corinthians dwells on this truth.
To believe in the Resurrection is to believe in a TRANSFORMATION of this world.
To believe in the Resurrection is believe not in escaping this world, but of it being made anew.
The body of the Lord Jesus not only came back to life, it was transformed, it became a thing of glory.
If this is true, it changes the whole manner in which we relate to this world:
On one hand, we treat the things of this world as real.
We care for the sick and poor, because they are real.
We seek to transform the world with love, because the world is real and valuable.
The things of this world will pass and change, but they are real.
On the other hand, we relate to this world as a thing passing, a thing that will be changed and transformed.
Thus, as both our first reading and Gospel texts insisted, we do not live for “riches” (Lk 6:24) or for the pleasures of the “flesh”(Jer 17:5).
The Christian is thus called to “deny himself” (Lk 9:23) if he is to follow the Lord Jesus.
St Paul is very emphatic about a conclusion of all this: if we live “for this life only, we [Christians] are the most unfortunate of all people” (1 Cor 15:19).
-we will have denied ourselves pleasures, we will have regulated and disciplined our bodies, but there will be no future body to come.
For us who live TODAY, in the 21stCentury, there is an implicit challenge in all this:
Do we live for this world, or for the transformed resurrected world to come?
Do we truly deny ourselves in this world, in the hope of the resurrection to come?
Do we give to the poor, to the extent that it affects our ability to enjoy riches ourselves?
If we TRULY believe in the Resurrection, then the answer to these questions should be logical.
If, however, we only half-believe it,
if we actually live in the same way as those who think there is ONLY this world to live for,
Then, to apply St Paul’s words differently, “we are the most unfortunate of all people”(1 Cor 15:19).
Posted by Fr. Dylan James, Catholic Priest, dual American-British citizen at 00:30 No comments: 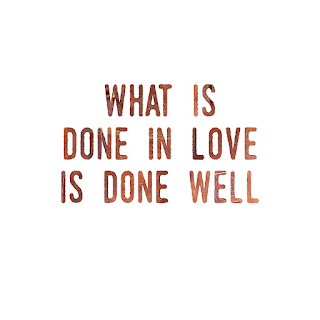 1 Cor 12:31-13:13
For the past month, I’ve been reading the spiritual diary of Pope St John Paul II.
There is a quote that he refers to often, cited in the Catechism (1022), and from St John of the Cross:
“At the evening of life, we shall be judged on our love”.
There are many things we do in life, but it is whether we do them in love that will be the basis of our judgment.
This is a very powerful way to focus on the meaning of the second reading we heard from St Paul, which was on love.
Love needs to be the thing that animates all our activity.
When I start my day, the alarm is going.   I will have ahead of me a range of tasks,
some complex, some mundane,
some enjoyable, some taxing.
When the alarm goes off all that lies ahead is before me.
But if it all is to have VALUE, then it needs to be done with love.
Otherwise, to quote St Paul, I might “move mountains, but without love, I am nothing at all” (1 Cor 13;2),
and my activity is nothing at all.
I might need to clean and tidy things up today.
I might do that efficiently, but with no real consideration of others.
I get the task done, it is finished.
But woe betide anyone in my way!
However, if I clean and tidy up, and do it with love, then I clean and tidy up very differently.
I am aware of the REASON I am doing this
-so the house will be clean FOR OTHERS
-they come here, or live here, I want it to be nice FOR THEM
And, or, I clean my kitchen
-so my kitchen will be clean FOR GOD
-it’s God world, it’s Gods house, He wants it to be its best, so I clean it FOR HIM.
Let me pause and define love. The Catechism, quoting St Thomas Aquinas, defines love this way:
"To love is to will the good of another"(CCC 1766, citing St. Thomas, ST I-II q26 a4).
I think of someone;
I think of what is GOOD for that person;
And I choose to WILL the good for that person.
If this is how I am doing every task, then it transforms every task.
Working with love, brings JOY to the task, because I am thinking of the beloved.
Working with love, brings SATISFACTION to the task, because I see its value for the person I am loving.
One final example: relaxing.
Everyone needs to relax, just like the body needs to sleep.
There is a way of relaxing that is selfish -it’s all about ME.
There is another way of relaxing, that truly relaxes, but knows this relaxation is what enables to serve others at other times.  THIS way of relaxing brings love, even into the relaxation.
Why am I relaxing now?  So I can serve others later.
“At the evening of life, we shall be judged on our love”(CCC 1022).
That might sound, on one level, like a sweet thought, but it can also be a fearful one: what if we have not lived a loving life?
In fact, Friday night, the night of the day when I had written the first draft of sermon, I examined my conscience and saw an absence of love that day.
It had felt a busy day, a full day, a day of many divergent parts.
But I reflected that there had been little love in that busy-ness.
If, near the of life, I have the same sense, the solution is the same: repent.
Confess my lack of love to the God who is love.
Back to the text from St Paul: love is the only thing that truly lasts.
If we’re busy moving mountains, but not for love, then those mountains will crumble to dust.
But if we move those mountains, or even those molehills, with love,
then the activity I launch into when my alarm goes off  -the mountains I build will endure in eternity.
Posted by Fr. Dylan James, Catholic Priest, dual American-British citizen at 00:30 No comments: