Litany for Peace and Unity in the Holy Land 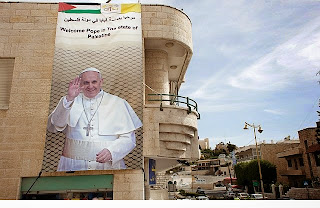 In keeping with the request of Cardinal Nichols and others we had a 3-4pm Holy Hour to pray for peace and unity at the very hour when the Pope is greeting Christians in Bethlehem.
For peace in the Holy Land
For a restoration of unity between the Churches.
Cardinal Nichols has asked us to "unite in prayer at the very hour that Pope Francis will visit Christ-ians in Bethlehem on Sunday 25 May between 3pm and 4pm (UK time)… [in] an hour of prayer before the Bless-ed Sacrament". The Cardinal also spoke of the import-ance of supporting the Pope’s mission and of “praying for peace” in the Holy Land. The Pope’s three day visit to the Holy Land begins on Saturday, 24 May – the intense programme includes a visit to Jordan, Palestine and Israel. Pope Francis will encounter the Ecumenical Patriarch Bartholomew in Jerusalem. They will sign a joint declaration and then preside at an ecumenical prayer service at the Basilica of the Holy Sepulchre together with other Christian leaders. About the visit, Chair of the Department for Dialogue and Unity, Arch-bishop Bernard Longley said: “The meeting of Pope Francis later this month in the Holy Land with Ecumenical Patriarch Bartholomew marks a very significant step on the road to Christian unity. This year sees the 50th anniversary of the two great documents of Vatican II on ecumenism and inter-religious relations “Unitatis Redin-tegratio” and “Nostra Aetate… I hope that the Holy Father and Patriarch Bartholomew will draw attention to the struggling Christian communities of the Holy Land. I am delighted that many of our parishes will pray in solidarity with Pope Francis and the Ecumenical Pat-riarch on the afternoon of Sunday 25th May. I am also grateful for all that the Friends of the Holy Land have been doing to highlight this important visit and ecumenical encounter.”

Let us pray
Priest:
Eternal Father, give to the land of Your Son’s birth that peace that only the Prince of Peace can bring, and restore to His Church that unity for which He prayed. Through Christ our Lord. Amen. 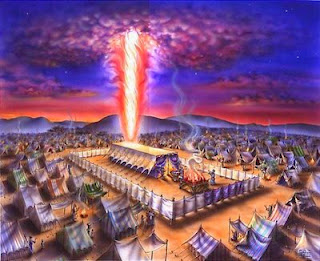 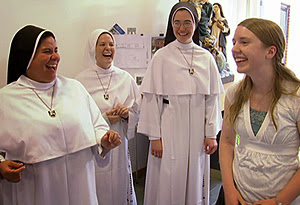 I'm not going to say much now because two holy Dominican Sisters (from the New Forest priory) are going to speak to you at the end of Mass and I'd like you to save your attention for them.
Today is the worldwide day of prayer for vocations.
We tend to think of this as vocations to the priesthood, which is its initial focus, being always on 'Good Shepherd Sunday', the 4th Sunday of Easter.

But the simple point I want to make to you now is that one of the ways that God cares for and shepherds His Church is through vocations to 'Religious Life', to monks, nuns, and religious sisters and brothers.
This has taken a wide variety of forms through the Church's history:
We read of the order of widows that St Paul speaks in his epistles,
We know of hermits like St Anthony in the desert,
And of monks like St Benedict in abbey communities,
And nuns like St Scholastica.
And we know they did a wide variety of different apostolates:
Enclosed contemplatives in prayer like St Clare,
& Active caring for the poor and destitute like Mother Teresa of Calcutta.

As you know, for some decades there was a great crisis in Religious Life in the 1960s onwards, and many left.
But you may be less aware of the fact that there has also been a great renewal and revival, and the sisters speaking to us at the end of Mass today are a part of that:
A new congregation, doing a slightly new apostolate,
But part of an old and eternal thing in the life of the Church: 'Religious Life'
-one of ways Christ still shepherds His Church today.


Here is a photo of Sr Mary Catherine OP, speaking at the end of Mass today: 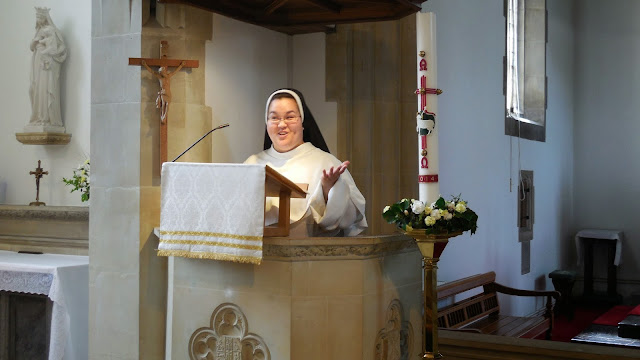 Here is a photo of Sr Mary Benedicta OP and Sr Mary Catherine OP in the hall after Mass, over tea and coffee, with Fr Dylan: 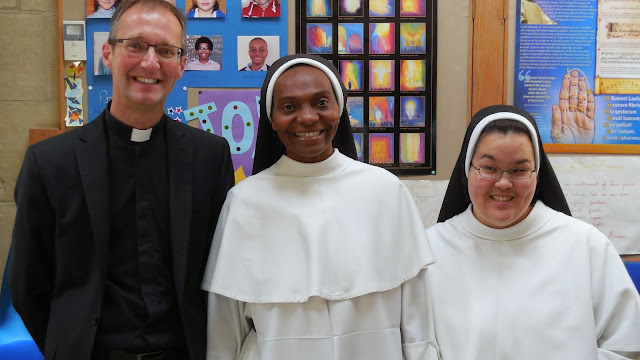 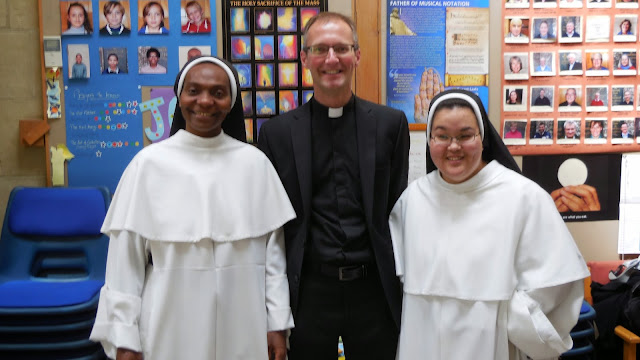 Fr Dylan showing the two sisters Gold Hill in Shaftesbury, the 'must see' sight for every visitor: 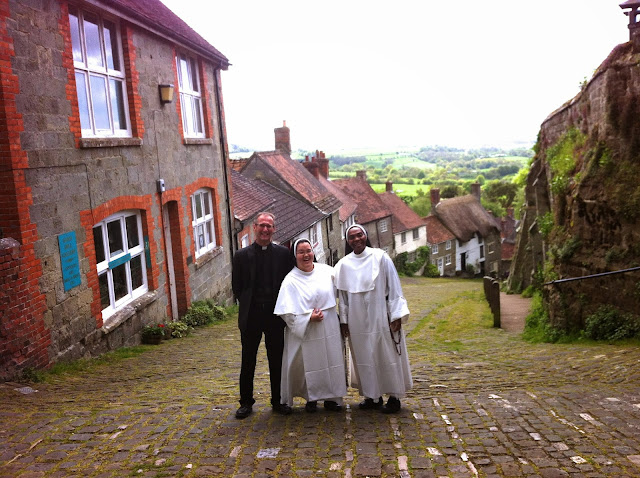 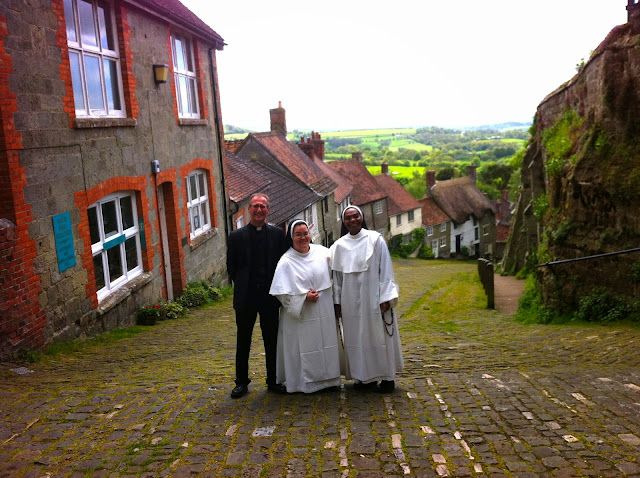