This weekend the Bishop preached at our Masses during his Visitation of the parish. There is no text available.
Posted by Fr. Dylan James, Catholic Priest, dual American-British citizen at 11:00 No comments: 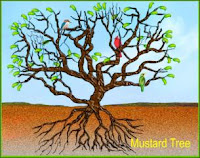 So, when we feel that God is not present, let us not be surprised, let us remember that we are not the first to fear so, but let us remember even more the promise of the Lord:
That He works even when unseen, as surely as the seed grows unseen underground;
That He works as a mighty shelter to which we can turn in our need.
Posted by Fr. Dylan James, Catholic Priest, dual American-British citizen at 00:05 No comments: 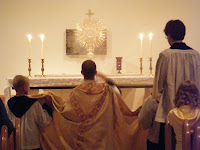 We keep today a feast that has existed in the Church for many centuries, but one that is probably more relevant and important for us today than it has been in previous eras.
And I want to make a very brief but important point about why it is relevant:

We live in a world today when few people believe in God, at least in any systematic way, and that means that few people expect to encounter Him,
to have Him close to them,
to have Him among them.
While the feast of Corpus Christi is not a feast that is likely to convert those who do not share our belief in God, nonetheless it is an important feast for us to recall ourselves as believers. Because we can be easily influenced by the opinions and attitudes of our atheistic society, and forget that God is near to us.

What Corpus Christi focuses our attention on is the fact that Jesus Christ is here with us in the Eucharist.
He is here with us now in our tabernacle, calling us to prayer and worship.
In a few moments He will be here with us on the altar. When the priest repeats the words of Jesus Christ, "This is my body... This is the cup of my Blood", then the bread and the wine cease to be bread and wine and become what Jesus said they were and are: Himself.
The Eucharist is Jesus Christ, present in His body and blood, soul and divinity, whole and entire in every host.

This afternoon we’ll be having our annual Blessed Sacrament Procession, and a procession like this very clearly focuses us on this truth:
that Jesus is with us,
that He call us to recognise Him and adore Him,
that He is not just present in some vague way but in His “physical reality” (Pope Paul VI).
Processing with Him,
being blessed by Him in a Benediction,
these are images of what the Eucharist means:
He journeys with us in life, just as we process with Him in the procession,
He blesses us when we come to Adore Him, as He does in Benediction.

This is the great truth of our Catholic faith that we recall today, our clearest belief that God is very near and close to us.
Others may have forgotten that God exists, and forgotten that He is close, but today’s feast reminds us that He dwells among us still. 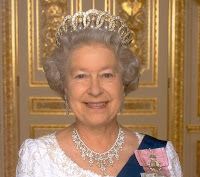