listen to ‘St Edward the Martyr, 22nd Sunday in Ordinary Time, Year A, Audio’ on Audioboo

Jer 20:7-9; Mt 16:21-27
Today, I’d like to speak to you about the danger of being a good person: it may get you hated; it may get you killed.
I speak of this in the light of three things:
First, our first reading, from Jeremiah, which recalled how doing the Lord’s work had brought “insult [and] derision” (Jer 20:8) for him. Jeremiah was a good man, one of greatest of the prophets, but the Lord had given him a tough task: He lived at a time when the people were being unusually unfaithful to the Lord’s commands, and doom, destruction, and exile in captivity were about to descend on them as punishment for their sins. And he had job of warning them, while there was still time. But it was not a happy message, “I have to howl and proclaim: ‘Violence and ruin!’”(Jer 20:8). And instead of welcoming his message the people stoned an imprisoned him. And we sometimes face a similar reaction when we need to tell people things that they need pointing out to them: if they are stealing at work, or living with someone they shouldn’t be, or neglecting to care for their children etc.
Second, our gospel text, in which the Lord prophesied His approaching crucifixion and taught His disciples that ANYONE who wishes to be His follower has to recognise that it involves “taking up the cross”(c.f. Mt 16:24). And, among the most immediate aspects of that Cross is what other people do to us precisely BECAUSE we are following the Lord, because we are being good.

Thirdly, in light of St Edward. As you know, our parish pilgrimage was this Wednesday, and we went to the site outside Corfe Castle where our parish patron, St Edward, was martyred. He was killed, martyred. Why? Because he was a good person.
Now, its important for me to emphasise this point because people sometimes say to me: Why do we call St Edward a ‘martyr’, he was killed by his step-mother, so how does that make him a martyr?
[St Edward, you hopefully recall, was the boy king of Wessex: he became king in 975AD at the age of 13, and was murdered by his step-mother when he was 16 –she gave him a cup of poisoned wine and then stabbed him, which is why he is pictured holding those two symbols of his martyrdom (cup and dagger) in the statue of him here in our church.]
But WHY did she kill him, and why did those plotting with her want him dead?
We can see the answer to that question by looking at the reaction of the people to his death:

When St Edward was killed, the people of his day might of reacted in many ways. They might have said, “Well, that’s one more rich selfish king dead.”
But instead, they hailed him as a ‘martyr’ –a word that means a ‘witness’ to Christ. Historically, some martyrs died for refusing to worship the pagan Roman emperors, others died for attending the Mass, but a great many were killed because of the GOODNESS of their lives –and so the Christian tradition uses the title ‘martyr’ for those who were killed out hatred for a good life.
As we know, people respond to goodness in different ways: Many people respond to good people by being edified by their goodness, inspired by it. But it is also possible to look at a good man and feel angry, spiteful, vengeful. To cover up our own sin by hating someone who does NOT sin. As Scripture puts it, “The wicked man plots against the virtuous and grinds his teeth at him”(Ps 37:12). And to be hated and killed by the wicked on account of your goodness is one of ways of being a ‘witness’ a ‘martyr’ for Christ.

To conclude, What does this mean for us? It means that we, too, need to be willing to suffer for being good –just as St Edward did, just as the Lord Jesus did: They crucified Jesus, and He taught that following Him likewise bring the cross. But there are two things it also brings: (1) in this life, the strength, joy, and consolation of having the Lord with us because we are being with Him, and, (2) in the next life, the fulfilment of the promise we heard Him make, that “He will reward each one according to his behaviour”(Mt 16:27)
Posted by Fr. Dylan James, Catholic Priest, dual American-British citizen at 00:05 No comments: Links to this post

No Sermon: Back next Sunday!

There is a pastoral letter from the Bishop this Sunday, available via the Diocesan website. Back to normal next weekend.
Posted by Fr. Dylan James, Catholic Priest, dual American-British citizen at 00:05 No comments: Links to this post

No Sermon this Sunday

There is no sermon today as Fr Dylan is on holiday.
Posted by Fr. Dylan James, Catholic Priest, dual American-British citizen at 06:32 No comments: Links to this post

listen to ‘18th Sunday in Ordinary Time, Year A, Audio’ on Audioboo 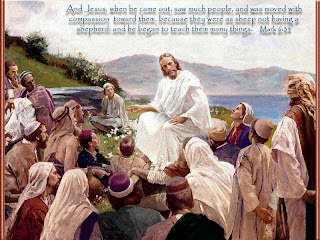 Let me start by referring to our second reading, where we heard St Paul recounting how, in his various trials, and the difficulties of those he was writing to, that "Nothing can come between us and the love of Christ"(Rom 8:35), and he made a further point that I want to elaborate on: He referred to the "love of God made VISIBLE in Christ Jesus"(Rom 8:39) -this is the point, something has been made VISIBLE in Jesus, something that shows that God cares.
Let me make a contrast:
The Ancient Greek philosophers of Athens taught about what God was like, about His essence, about how He was not a material body like us, about how He didn't suffer or have limitations, and how He didn't FEEL things like emotions.
The God of the Hebrews likewise had manifested Himself as being utterly transcendent, being beyond human capacity to comprehend, "my thoughts are above your thoughts" (Isa 55:8) was a repeated refrain. He revealed many things by what He DID; His actions SPOKE about what He was concerned about -but as to what He might be like in His very ESSEENCE, in that respect He remained largely unknown.

That changed in Jesus Christ: In the incarnation, God Himself, in the second person of the Trinity, took human flesh. And in that taking of flesh He showed what God was like.

When God took flesh, when He lived in our human nature, which of our vast range of possible human emotions was He seen to experience and manifest? Because the emotions He experienced, the manner in which He emotionally reacted to things and to people, this shows us what God is like. And our gospel text for today gives us one of a number of examples in the Gospels which refer explicitly to His inner life, referring to His emotions.

The Gospel we heard today described the emotion He felt on seeing the hungry and needy crowd: It said that "He felt COMPASSION for them"(Mt 14:14). And this is a word that is used repeatedly in the Gospels when the texts refer to the emotion or passion He experienced in seeing people in need.
Sadly, although our Mass translation texts sometimes translate the word as ‘compassion’ (e.g. Lk 10:25-37, 15th Sunday in Ordinary Time, Year C), the text today rather weakly translates the word as “pity”: the Greek word is actually splangchnizomai from the Greek word splangchna for bowels or entrails, which indicates that the Lord Jesus felt all churned-up inside, in His guts. He didn't see the crowds in need and then coldly and INDIFFERENTLY help them, no, He FELT, and felt-with them -that is what 'compassion' means, to be with-passion, to feel-with someone.
Jesus feels-with us in our needs.
He was hungry in the desert, He was thirsty and in pain on the cross, He was sad and wept when Lazarus died -any emotion or trial YOU are going through HE feels with you. He has taken our human nature and has compassion, 'feeling-with' us.

AND, before I conclude: He not only FEELS with us, He DOES things to remedy our problems.
So, we can say with certainty, that whatever your need is, He is DOING something about it. He is reaching out to assist you, assist you in a way that He knows even better than you do
Today's text from Isaiah and our Gospel text both speak of The Lord FEEDING the people when they were hungry. And this is but own of many examples of Scripture showing us that The Lord is a powerful God, an active God -He sees and responds to our need.

So, to return to my opening question: how do we know that God cares?
Because He is not unknown. He has manifested Himself. He has taken flesh and has compassion, is feeling-with us in our troubles.
Posted by Fr. Dylan James, Catholic Priest, dual American-British citizen at 00:05 No comments: Links to this post