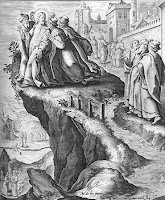 And yet, in that same short passage we heard, it also said, “He won the approval of all, and they were astonished by the gracious words that came from His lips”(Lk 4:21). Through His actions and teachings there were many ways that Jesus revealed Himself to be God, claimed to be God. But one of the ways I find most fascinating is simply to read the Gospel accounts see how people reacted to Him –His very personality was so incredible that people could take His claim to be God seriously.

Amazement, attraction, and yet rejection, were all the pattern of His life. Even as He was being rejected in His crucifixion, the soldier who stood at the foot of the Cross said in amazement, “Truly this man was the Son of God”(Mk 15:39).

But WHY did they reject Him? Ultimately, they rejected Him because of who He is: God, perfect goodness. His very presence demanded a response from people, a change, a repentance. We all know ourselves how being in the presence of a really good and generous person can make us uncomfortable, can implicitly tell us we need to do better ourselves. This was even more the case with Jesus: He called us to a new life, a life of holiness, and goodness, to be something better. And that part of our human nature that is resistant to change is what led to His death. It was our sin that killed Him.

Because He is God, He made claims that were not accepted. Claims that seemed too great. One of them is the claim we heard today, the claim to be a prophet not just to the Jews but to all the races and all the nations. While they may not have exactly understood what He meant, they knew that His claim to have a universal significance for mankind was too much.

There are many people TODAY who still think that Jesus’s claims are too much. They are willing to accept Him as something lesser, but not accept Him for what He claimed to be. They are willing to accept that He was a good man, that He was wise, a good moral teacher, a holy man. I’ve often had someone see my priestly collar and come up to me in the pub and start a conversation saying, “Now I believe this ‘Jesus’ was a good man, but I don’t believe… ”
However, you cannot accept this about Jesus without accepting the rest of what He said:
You cannot accept He was a good teacher, if you reject His teaching that He was God.
You cannot accept He was a holy man, if you believe He was fraud in His most central claim.
You cannot accept His morality, if you will not accept the Divinity that gives Him the right to forgive you your sins.
Either His central claim to be God is true (and He produced many miracles, signs, and His own rising from the dead to demonstrate the truth of His claim), or it is all false.
As C.S.Lewis famously summarised it: He is either a liar, a madman, or God.

What we believe about Jesus, what He taught about Himself, is very exclusive. It places Him in a unique position, superior to any other religion. That He alone is God, that He came to teach us, to call us to a new standard of morality, to forgive our sins, and to be Himself the sacrifice that takes our sins away. What we believe about Jesus is so great that many reject it, and many rejected it when Jesus first claimed it.

But that very rejection is for our salvation. He knew we would reject Him. He chose to make that rejection for our salvation, to offer His death for our sins, to make it the means by which we receive grace and are able to change and lead a new life.
We worship a rejected messiah, and it’s a central part of our faith –because it’s His resurrected triumph in this that shows His power to save, and proves His claim.