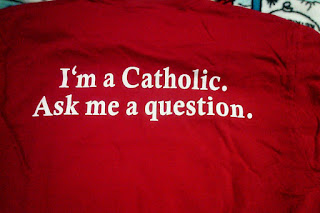 Mt 16:13-19
You often hear people say words to the effect of, "You Catholics are always going around telling people that you're right, that you've got all the answers." Over the years I've noticed that people sometimes say this even if I've been silent for the preceding hour! My preceding sense of 'having all the answers' clearly lingers!
Anyway, today we keep the feast of two saints who had all the answers, who are both very Roman and very Catholic -Catholic in the sense of 'universal', and I want to say a word about how and why these two things go together.

Both St Peter and St Paul died in Rome, died a martyr's death. St Peter had been Bishop of Rome before being executed. St Paul came to be there in a more circuitous manner: he had gone out, to almost the whole known world, spreading the Gospel to the gentile nations. He had gone out as one who thought he 'had all the answers', it made him followers among some, and enemies among others, and eventually he was imprisoned, taken to Rome, and beheaded. He had gone out to the whole world, with a 'universal' or 'Catholic' (in the true sense of the word) sense of mission –BECAUSE he had the answers. But if he had the answer, what question was he answering?

The question St Paul knew the answer to, that gave him ALL the answers, is the question we just heard St Peter answer in that Gospel text. The question of WHO Jesus is. The Lord Jesus had been travelling through the land, He'd taken upon Himself the Old Testament Messianic title of 'the Son of Man' (as I've preached about before here and a little here), working miracles, preaching “with authority” (Mk 1:21), claiming to do what only God could do (forgive sins(e.g. Lk 5:24), alter the Law of Moses(e.g. Mk 10:2-9), judge the nations(Mt 25:31)), and people naturally puzzled over who He was. The answer, as we heard, is that He is "The Son of the Living God"(Mt 16:16), the only Son, the Eternal Son of the Eternal Father, God from God, light from light etc.

If the answer had been, "You're a great man, a wonderful teacher", well, that might have been nice, but we wouldn't be here today, and St Paul wouldn't have gone out to all the nations to tell of Him. But, in fact, He is the One who makes sense of ALL things, the One "through whom all things were made"(Jn 1:3), and therefore the One with all the answers, who gives US all the answers in as much as we truly know Him.

Who, today, gives us those answers? The successor of St Peter, the Pope in Rome. St Peter himself didn't know that answer OF himself, as Jesus said, it was "given him by my Father in heaven"(Mt 16:17). And still today, the infallibility that resides in the Papacy, that protects what the Pope teaches us so that it is 'free from error', that gift to him is 'given by my Father in heaven'. It is because of this that the Pope can, and must, give the world the answers it needs today. So, it is because the universal Church is Roman in its centre, Roman in its connection to the truth, that the Church possesses that truth that sends her out to all the world, send us out. Being Roman and being Catholic thus stand together. And all those answers we are sent with are encapsulated in knowing the answer to that central question, "but you, who do you say I am?"(Mt 16:15)