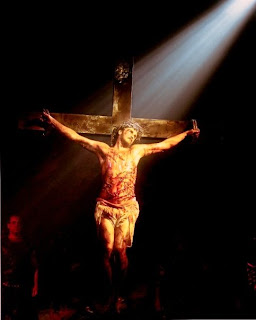 Jn 18-19
"My kingdom is not of this world" -so The Lord declared to Pilate.
And yet, everything in His words and deeds, and in how St John describes the narrative for us, makes it clear He is a king:
He has a crown -albeit a crown of thorns.
He has a royal purple robe -even if it is put on Him in mockery.
And He reigns from a throne -the throne of the Cross, a throne unlike any other, for a king unlike any other.

His "kingdom is not of this world". But what is His kingdom about? And what sort of a king is He?
The answer that The Lord Himself gives to Pilate is that it is about "truth".
This might seem like a rather odd and abstract foundation, especially for modern people living in a relativistic age where, like Pilate, it is felt that there is no such thing as "truth".
But why does Jesus die?
For a lie? For a fantasy? For an opinion?
No. For truth.
But, What "truth"? The truth that is Himself, He who said, “I am… the truth”(Jn 14:6). But let me note three subsidiary but foundational truths:

The most foundational truth? The truth that He loves us.
This is not a mere wish, or dream. He, and the Heavenly Father, have made this clear by His choosing to undergo the death of the Cross. The Cross stands as an eternal sign that He loves us.

Another truth: The truth that we are sinners in need of a saviour.
This is not a fashionable truth. But the Cross is not about fads or fashions. It is about something that lasts through every age -even if men in some ages pay less attention to it than men in other ages.

A third truth: The truth that He is merciful.
Mercy is not the same as love, it is a particular manifestation of it, as Blessed Pope John Paul II said: mercy is love in action.
Mercy sees sin and sees the sinner. Sees the horror of the reality for all that it is.
And yet, mercy makes a choice: the choice to forgive. Not a pretence that the sin wasn't really there, not a pretence that it didn't really matter. No. Mercy see it. Knows it matters. But chooses to keep loving us anyway. Chooses to forgive us.

Which brings me back to His kingdom and kingship not being of this world.
Kingship, I think it's true to say, is frequently seen as being a thing about power.
And how is the power of Christ's kingship exercised?
We might note the sort of 'inner' power of character that enables Him to forgive so thoroughly. It takes strength to forgive.
We might note an 'outer' power too, the power that works the coming Resurrection. The power that is not defeated in death.
And, unlike worldly kings, it is a power that is eternal. Worldly kings and their kingdoms rise and fall. Whereas: the kingship of Christ was before the Creation of His world, will last until He judges the remnants of His world at "the end of the age", and will remain forever in "the new heaven and the new earth".